I’m doing some editing of an upcoming course on Windows Server 2012. One key feature of the course is showing off multi-computer management. As part of that, I’ve rebuilt a pair of Windows 2010 RC servers. I plan to run VMs on both machines, but also to manage the pair using PowerShell and the new Server Management tool. The new Server Manger now resembles this screenshot taken from one of my new hyper-V hosts: 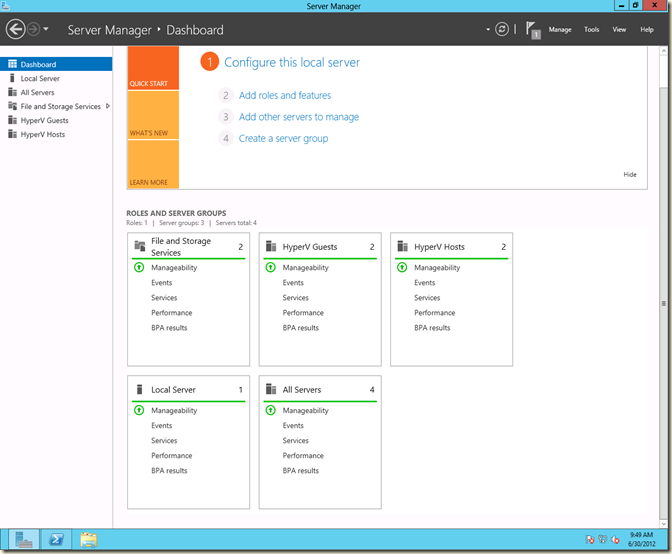 As you can see, I’ve defined two new server groups, HyperV Guests and HyperV Hosts. This tool makes it possible to mange groups of servers as a single entity. Under the hood, things get really cool. When you carry out remote management using Server Manager, Server Manager creates a PowerShell Workflow to carry out the management task, and then executes it against the remote  servers. But I can also do this directly from PowerShell (with our without the workflow aspect).

For example, suppose I want to add all the RSAT tools to both HyperV hosts: Well I could do it from the GUI, but from PowerShell, this is trivial:

And just like that, all the RSAT tools got loaded on both machines. This is extremely powerful but to really make use of it, you have to start thinking a bit differently and get to know and love PowerShell remoting.