Microsoft has published a cool infographic on Azure which you can get from http://azure.microsoft.com/en-gb/documentation/infographics/azure/ 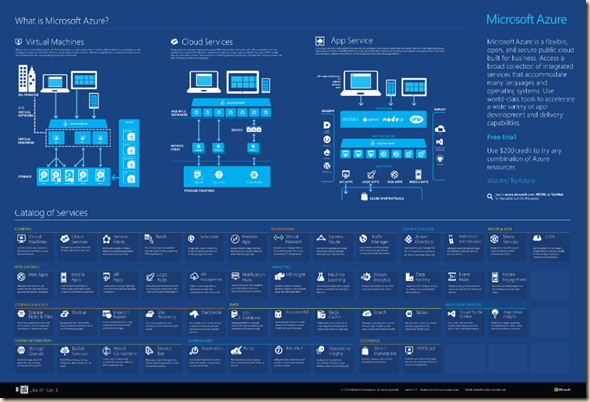 This infographic provides a simple overview to Azure features, Azure services and notes typical use cases. The document is actually PDF file which means you can scale it up or down. I love this diagram as it shows all the key features of Azure. Plus it's up to date!

I just saw a neat post describing how to study for, and pass, the Azure 70-532 Developing Microsoft Azure solutions. If you are planning on taking that exam, I suggest you see @shahedc's recent blog article: http://wakeupandcode.com/azure-70-532-study-guide/. Lots of great advice!

Microsoft produced a basic pricing calculator to help Azure customers. But as you can see here, customer feedback on this calculator was not particularly positive. In the Azure training I do, I find partners too found this old calculator not overly outstanding.

But, MS has listened and has begin rolling out an entirely new Calculator. So far, there's a new calculator for Virtual Machines which you can access at: http://azure.microsoft.com/en-us/pricing/calculator/virtual-machines/. The VM calculator looks like this: 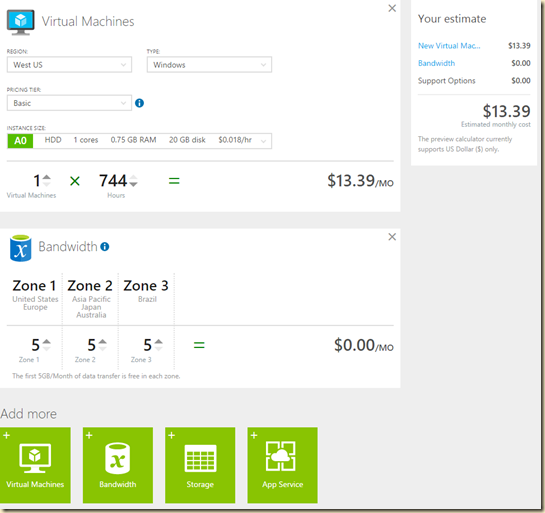 This is a distinct improvement – I look forward to seeing further improvements in the calculator.

In some recent training, I challenged the attendees to 'throw away' Cmd.EXE and to use the PowerShell console for everything. A good concept, but they challenged me back with: But what about all those commands I used to use – I can't use them any more, such as Ipconfig. That caused them some concern.

But: it turns out that Windows console applications run pretty much just fine under PowerShell. While I prefer using GIP than IPconcig, the later sure is a lot faster and I confess to using it when I just can't stand to wait GIP to finish up it's work. Its' great that these commands just work in PowerShell - just about every Windows Console application runs just fine, although there are some exceptions (and work arounds!).

The first exception is where PowerShell parses the command's parameters and recognises some characters in the command invocation as special PowerShell syntax, rather than the syntax of the command itself. For example, BCDEdit.exe used a Guid, enclosed in "{}" to represent different boot entries – PowerShell sees the guid as a script block , not as some text that can be parsed by the command and thus fails. Most of the misbehaving commands can easily be tamed by using the trick I showed in my blog article: http://tfl09.blogspot.co.uk/2012/08/taming-wild-console-applications-in.html – just use the –% characters as the first text after the cmdlet name (following by the rest of the command's normal parameters).

Yet another reason to stop avoid learning PowerShell today!