I’ve just finished looking at a recently published book: Windows Server 2010 Unified Remote Access Planning and Deployment written by Erez Ben-Ari and Bala Natarajan. Erez has written several books related to this subject for Packt and is a PSS engineer at Microsoft. Bala is a Program Manager in Windows networking team – so these guys should be in the know as to this technology.

Unified Remote Access is the new name for the Direct Access feature added to Windows in Windows 7 and Server 2008 R2. With Direct Access/URA, a client is able to access internal resources on an internal network via encrypted IPv6 tunnels. While URA is a pretty technical subject – and potentially difficult to setup, the book takes you through the key planning, setup and management topics. It’s worth noting that while setting up URA is complex and potentially disastrous if setup badly, Microsoft has put a lot of effort into making the installation wizard doing most of the hard work.

The book also looks more deeply at both Group Policy and PKI which are fundamental technologies used with URA. The final chapter of the book is a good look at troubleshooting. Given the complexity of URA, I almost think this content could go earlier if only as a warning to the unwary.

All in all, it looks a good book to have if you are planning to deploy URA in your organisation.

Moving to a Windows Phone–Part 2

As I recently posted, I’ve won a Nokia Lumia 820 from our good friends at Microsoft – now I have to use it (for at least 3 months). As I flew back home yesterday from a training gig, I pondered on what I actually needed in a phone. I’d had the iPhone for a couple of years and about the only weaknesses are the inevitable scratches, the slowly diminishing battery life and the reality that I needed more storage on the device. Otherwise, I really like the iPhone – it does what I want, I can have some fun (I will probably never conquer Plants v Zombies), listen to an extensive collection of Grateful Dead shows – plus it makes phone calls.

So what does the phone need to do for me? What features are really important – and a literally deal breakers, which were nice to have and which were things I’d not miss. Having thought about it, here’s my key features.

Well – that’s my list. At least for now – I’ll give this more thought and reserve the right to change this list at any time!

My next post will cover first impressions of the new phone.

Moving to a Windows Phone–Part 1

As many readers of this blog have noticed, I was issued and have accepted a challenge from Microsoft.   Microsoft UK is promoting  ways for IT Pros to get copies of Windows Server and System Center. Their challenge was to get people to click through to their sit where you can download the relevant software and try it out. My reward, as described here was twofold: If the bunch of challengees get enough clicks, Microsoft UK will pay for us to go to TechEd. I’ve been a TechEd EU supporter since my first TechEd UK in a wet rainy Bournemouth in 1994. And second, if we each got over a certain number, Microsoft UK would give me  a new Windows 8 phone.

Now those of you know me, know I love my iPhone. Those very nice people at American Express UK gave me an iPhone 2 years ago after some appalling mistakes on their part.They screwed up mega-big time but fixed the problem and sent me a (then) new iPhone by way of a tangible apology. Much appreciated it was, and I have since become utterly in love with my phone. Frankly, I have NO good reason to upgrade other than to respond to the challenge. And, as part of the challenge, I have agreed that if I won the phone, I would use it exclusively for 3 months.

In terms of a new phone – if truth be told and all things are equal, I’d have another iPhone. It is all I could want and more. The phone bit sort of sucks at home- but that's O2’s issue NOT Apple’s. And no matter WHAT handset I get, O2 will still suck at home (I think), but I will easily live with that. So,bottom line, if I really am to dump my iPhone, it’s replacement better be as good.

With that all said - the news is in: I am tomorrow picking up a new Nokia Lumina 820. I am committed to a 3 month run. Watch this space! I am going to Microsoft’s offices tomorrow morning to pick up my new phone.  I will post more ASAP

And in the meantime: please help me to go to TechEd Madrid by clicking: here, here AND here. Please?

I’m working on some courseware for Office 365, Microsoft’s online office product. I have a small business subscription - www.reskit.net, for example is the hosted SharePoint external facing site, and you can get me at tfl@reskit.net. I love the product as it was pretty easy to setup, and works well in practice.

Last week, in preparation for an upcoming training course I began documenting how to get it all setup. I have the cmdlets on MY local workstation, but need to show delegates how to find, install and use them on their systems. I spent several days trying to find these cmdlets – and even went so far as opening a support call with Microsoft, although 2 days later I’ve still had no reply.  But after some considerable amount of effort, I’m sorted. Let me show you how I , finally, got things sorted:

I started at the MS Online Portal and click on the Setup/Overview which brings up this window: 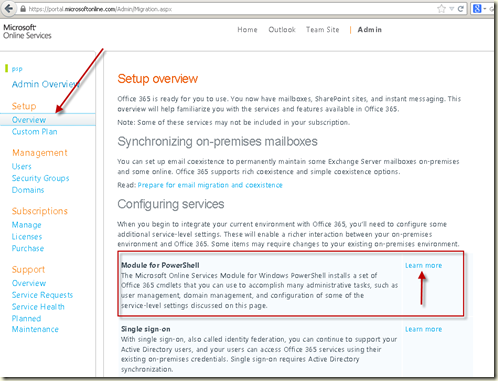 Easy, you might think, just click on Learn More link for Module For PowerShell (highlighted above). Ok – So I click on this link and get this: 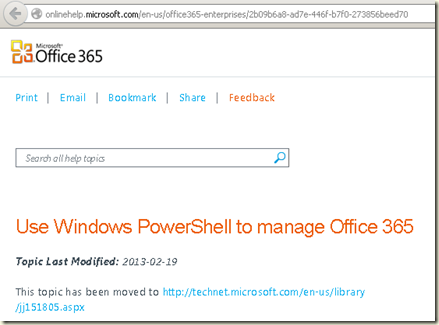 The page has moved. Nothing new, you might say, as Microsoft does this thing all the time. But good on Microsoft for pointing out where the content was moved to! I figure things have changed in Microsoft’s haste to get the new versions of Office 365 out and it may take a while (Ed: 3 weeks??) for the first page to point to the right place. But the redirect link is better than a 404 – so I click that redirection link and get this: 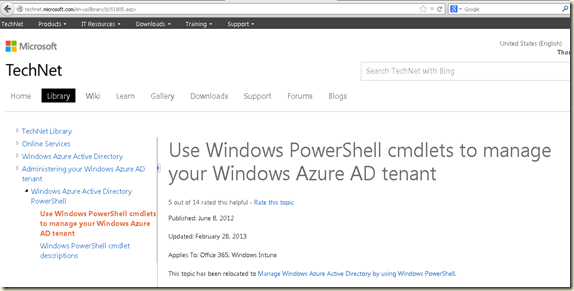 Hold on. I wanted the Office 365 cmdlets not the Azure AD cmdlets. Now it may well be that it’s Azure that ultimately manages O365’s AD. But how do I know? What I am looking for is not what I’ve found. Heck, if I wanted Azure cmdlets, I’d have searched for Azure in the first place, not Office 365. And worse, these have been relocated too! But  there’s a relocation link so maybe not al is lost.

So I click on the link but that just takes me back to the parent node in the table of contents! I’m not going to repeat my rant about the lousy skins MS have foisted on hapless users and how poor the decision to scrap the Class skin was and how hard the TOC now is to use. But even putting that to one side, pointing to a TOC parent doesn’t make much sense.  But then I look carefully at the resultant page: 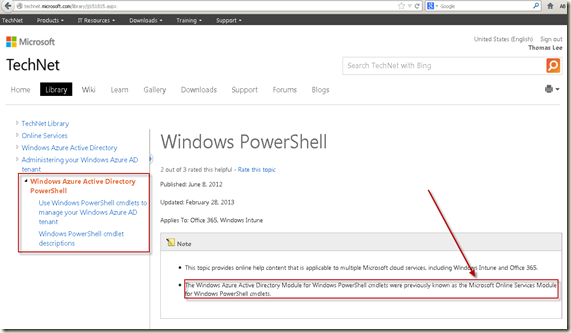 Notice the little note (highlighted above) that says the cmdlets have been renamed. Why couldn’t the very first page on the Online Portal have mentioned this? Or on then first redirection (these content has moved and has been renamed). So the mystery is getting closer to being solved.

So off I go, download these ‘new’ cmdlets (which don’t sound like what I need, but I’m willing to try). But when I try to install the cmdlets, I get told it needs the MSOID Client. So I find that, install it, and try to install the cmdlets again. Whoops – it turns out I need the old .NET framework (I am working on Server 2012 for all these demos). And for reasons best know to some pointy haired boss, the 3.51 Framework has been removed, by default, from Server 2012. So I search out the ISO image, and do the magic incantation:

With that loaded, I try to install the Cmdlets again, the installation succeeds. So off I go looking for the Azure AD cmdlets – but there aren’t any. The module loaded was NOT named Azure (as the web pages seemed to indicate I needed), but MSOnline (which of course is what I wanted all along). But they work. HORRAY. But it took days of effort and following what looks like very incorrect links – I just wanted Office 365 stuff, not Azure, or a lesson in MS product naming (i.e. Office 365 is Azure, except when it isn’t, etc., etc.)

Note to Microsoft: you really need to do a better job here. Please fix the original page to a) point out the right cmdlets, b) point out the renaming and c) that there are pre-reqs and where to find them. Finally, please put the renaming front and centre – especially when what was renamed wasn’t actually renamed. Folks (and I know I am not the only one) get confused with stuff like this.

Summary: It’s taken 4 days of looking and searching to find something that doesn’t sound right, but ends up being so. It really shouldn’t be this hard. I wonder if the new Office 365 exams will test the skills that are REALLY needed to install these cmdlets?

As a trainer, teaching PowerShell, I use WMI Explorer heavily. For those who may be unfamiliar, this is a PowerShell script that displays information about WMI on a system. Written by MOW, a PowerShell MVP, it is for me the best tool I can find for displaying WMI data to the class.
The bad news is that for some reason, it’s old home is not resolving – so all the search engine listings point to a host that for some reason is not there.

In the meantime, I’ve put a copy here: https://docs.google.com/document/d/1kuyoyFSc-wNRZBZjWI3aNjIMdw48hYS9Av4S_iNMBwI/edit?usp=sharing