I was pleased to see this recent article over on Petri.com. The article calls out some of the top PowerShell experts you can find on Twitter. I was pleased – as I was mentioned!

Ever watched someone who really know all the keyboard short cuts as they type along? I've watched some folks and they are blazingly fast. One reason is that they do indeed know all the short cuts! Ed Wilson has just published a cool article on the PowerShell Console shortcut combinations.

I have to say, there were some I did not actually know!

PowerShell Profile Files – What's in Yours?

I've recently finished teaching a PowerShell course – and during the course we got into a long discussion on Profiles and how to best use them. With 4 or more (think ISE vs. Console, etc) profile files to pick from, what to you put into your profile file and which ones do you use? We had a lively discussion and decided that for the most part,just using Profile (this host, current user) is probably easiest as most systems have just one user logging in and that user (i.e. me/you) tends to just need two profiles (one for console and one for ISE).

But that leaves the question: what should I put into my profile. I just noticed a good Scripting Guys post showing what a number of Microsoft employees use in their profile files. This makes good reading, provides food for thought and has given me ideas of things I want to add to my profile. Happy reading.

I just notices that Cerebrata have brought out a set of cmdlets for Azure. For an introduction, see: http://www.cerebrata.com/products/azure-management-cmdlets/introduction. From here you can also download the cmdlet.

These cmdlets are, to say the least, NOT cheap. UK Price is over £80 pounds. I suppose if you are doing a lot of work with Azure and PowerShell this is good value. There are volume licensing options. Depending on your need, you may decide to use the Microsoft cmdlets and make up the difference yourself.

There is some similarity between these two technologies in that both use Open Data Protocol (OData) to access and use the repositories. Stefan Stranger has just published a cool article showing how to use Odata to query for the repositories using OData.  Stefan points out an Odata Profider, over on CodePlex. This provider enables you to access the various repositories using your normal DIR/CD cmdlets (well aliases!), like this (and click the graphic to see a bigger version!): 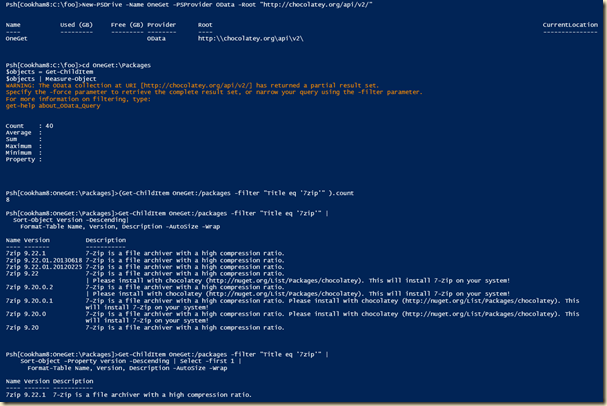 It's great to see the wider software and hardware industry embracing PowerShell. Another company to do it is Sitecore, a web content management firm. Sitecore has just announced some PowerShell extensions you can take advantage of (assuming you use Sitecore). Read more about these cmdlets over on Mike Reynolds site. You can also download the actual cmdlets from SItecore's site.

The initial repository is a public one - and that may not suit everyone. You may not want your users just loading stuff because they can. Likewise, you may not wish to publish corporate modules to a public repository, for any one of a number of reasons.

To resolve this problem, the PowerShell Team blog has just published a cool post, by John Slack, that describes how to setup an internal PowerShell Get repository. If you have a lot of modules and want to provide a self-service repository, this article shows you how. It also provides some additional background on PowerShell Get. This is great information which, imho, should be in any about_PowerShellGet help file. Sadly, there is no such help file as yet. We'll see if future versions of PowerShell include such a file.

One nice thing about TechEd, the contents are generally recorded and made available for download. This year, there's a cool PowerShell script to help you. Find out more about the idea over on the Windows IT Pro site, and go to the TechNet gallery to download the script.

When I first started getting into PowerShell, I browsed the TechNet and MSDN libraries to find samples that illustrated the use of various MS technologies. To get better at PowerShell, I then converted these MSDN/TechNet samples into PowerShell, posted them to the Microsoft site as well to my own http://pshscripts.blogspot.com blog site.

At the time I began doing this, there was a nice library page for both TechNet and MSDN which showed a tag cloud of the samples that had been tagged and a leader board showing who’d submitted the most updates. With the work noted above, I quickly took top spot – and slowly but surely created a huge gap between me and the next busiest contributors (at time I had contributed more content to the Technet site than the next 9 together). For reasons I’ve never been told, much of this was taken away – there is no leader board any more, the tag cloud(s) are gone and the ability to add community content is much diminished.

Having said that, today I noticed something that really made me happy. Real PowerShell samples in Technet.  If you look at the page http://msdn.microsoft.com/en-us/library/aa394585(v=vs.85).aspx, you see a bunch of tasks you can undertake using WMI. In the days gone by,  had added a bunch of samples here, recoding the VB script samples into PowerShell.  What surprised me is that all MY samples are gone, but: there are now proper PowerShell samples included in some of the samples. Look, for example at http://msdn.microsoft.com/en-us/library/aa394600(v=vs.85).aspx – which shows using the registry – you can now see the samples where they belong.

In converting my samples to integrated samples, Microsoft has removed the attribution and has made some silly errors. For example, on http://msdn.microsoft.com/en-us/library/aa394600(v=vs.85).aspx?cs-save-lang=1&cs-lang=windows%2bpowershell#code-snippet-1 (on he first sample, $computer is defined but is not used for example). And someone has taken the attributes (like who wrote the sample) off.

It’s great to see samples using PowerShell being added into the TechNet library – long may this continue.