Over the years in the industry, I've had the opportunity to use pre-release software. Some of it has been pretty awful, while others perfect or nearly so – and more in between. Using software that has not been richly tested is always a bit of a gamble, although some vendors are better than others. Of course, issues during pre-release typically get resolved prior to general release – so these errors really only affect those of us mad enough to use beta code!

With that in mind, I downloaded the latest build of PowerShell V5 as soon as it was released. I was anxious to see what, if anything, had become of the Chocolatey provider for Find-Package (OneGet) as it had been removed in an earlier beta version (as previously noted!). So my first test was to do both Get-Module and Get-Package to see the two 'get' package managers in action.

Much to my surprise, running Find-Module produced a ton of errors: 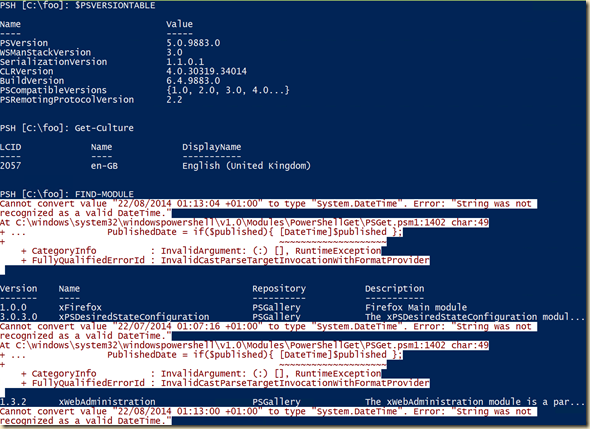 Weird, to say the least. I tried to see if other beta testers were seeing this issue the ones I was able to chat with did not see this error. Then I was having a Skype conversation with Aleksander Nikolic who asked me what culture I was using. As you can see in the above screen shot, I'm using my home culture (en-GB). He suggested it was culture related. To test this, I spun up an Azure VM, loaded the new version of PowerShell V5 and, as if by magic: 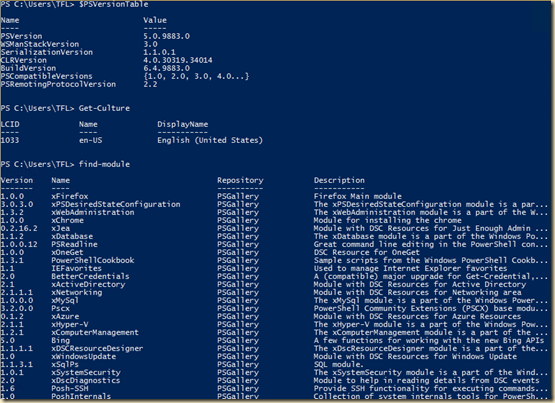 Just as I expected! This looks to be another culture issue – one that will no doubt be sorted out by the time RTM comes around (or, hopefully, a newer build is released that works with En-GB).

It's easy to understand this issue, but I guess I'd have been less surprised and frankly less disappointed, if the issue had been mentioned in the otherwise excellent release notes (or possibly even acknowledged in the release notes). One for the future perhaps.

So for the foreseeable future, I'm stuck with using a partly broken beta build. I can live with OneGet being broken in exchange for the other goodies in V4. And yes, this bug has been reported on Connect (https://connect.microsoft.com/PowerShell/Feedback/Details/1037088). Feel free to vote it up!

The joys of using Beta software!