PowerShell 7 Preview 6 ships - Get It Now!

The PowerShell team have released another preview of PowerShell 7. This release, which I expect to be the final preview before release of PowerShell 7 early in 2020, comes with a number of fantastic new features. Over on the PowerShell blog, super-star Steve Lee notes the cool features. A total smorgasbord of wonderfulness. Read Steve's excellent post here: https://devblogs.microsoft.com/powershell/powershell-7-preview-6/.

One particular feature that caught my eye was the improvements in Test-NetConnection. As many of you know, Ping.Exe, which has been around pretty much since the dawn of IP  (as in TCP/IP). uses ICMP echo request/reply. Due to ICMP attacks, many organisations turn off ICMP - thus using Ping would show no system, even though port 80 is open and working just fine. Test-NetConnection allows you to both ping (eg using ICMP) as well as test the connection to a specific port This is a huge improvement, although the command is very slow due to it being based on WMI.

In P.6 this has been re-implemented using not WMI but .NET. And the results are pretty awesome! Here is what it looked like in PowerShell 5.1: 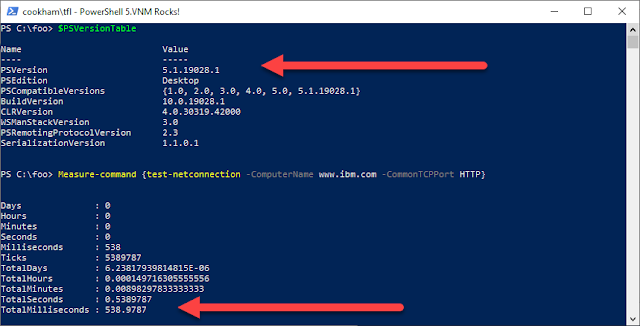 But take a look at the performance of PowerShell 7 P6:

That is a pretty significant improvement! And by way of comparison, using Ping.Exe would have taken over 3 seconds!