I’ve just updated my text Windows 10 test VM to the latest Insider build, 14328. Needless to say, one of the first things I did was to open up PowerShell and look at $PSVersionTable. And when I did so, there are two interesting changes. Here’s what I see: 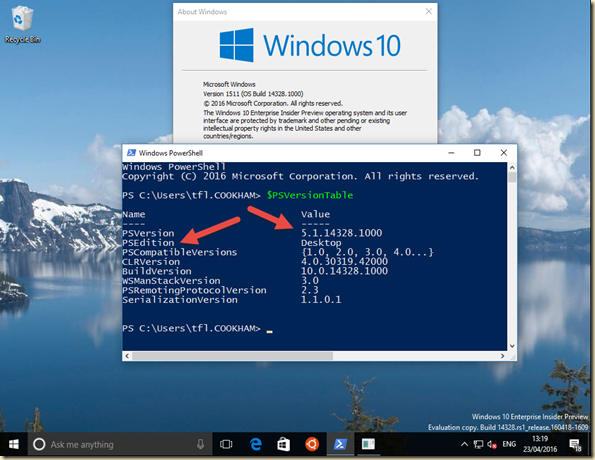 Note there are two interesting changes:

What remains are two questions: what is new in 5.1 (or what WILL be new when it’s ‘released’), and what’s up with the PSEdition property? It also somewhat begs the question around what is the ongoing strategy surrounding version numbers? What is the effective difference between 5.1 and 6.0? I’d just like to understand the PowerShell team’s version numbering strategy.

So far as I can tell, there’s nothing I can see new in this build of PowerShell (aside from the additional property. But I’ve only had this new build up for an hour. More fun later today, no doubt!

The PSEdition is used to distinguish Nano Server from the regular Windows Server (Microsoft told us at PSConfEU).

Also: TP5 is going to be released in about 3 weeks.