Like many techies I know, I use Windows Server 2008 as my main workstation OS. I find it much more stable than any other MS OS, with none of the consumer gimmicks of Vista. I am very happy with using Server 2008 – I get all the useful features of Vista, plus I get key features like Hyper-V, SMTP Server, and DFS. It rocks! My new laptop (due “soon”) will also be tricked out this way!

Out of the box, of course, it’s a server OS, and not a desktop OS. But Google to the rescue – there are several sites that tell you how to trick out Server 2008 to run as a workstation. The site I’m using at present is http://www.win2008workstation.com/wordpress/. I’m very happy with the end results and would not ever consider moving back to either XP or Vista.

As an aside, I think there’s a market here for a workstation class OS – in effect what I have running now. Tools like DFS, or more importantly Hyper-V are are needed for a small but important set of users. A workstation OS would put (client) Windows on a better footing against Linux/Unix OSs which allow these sorts of tools. Instead of having upteen home versions of Win7, why not have a Windows 7 Professional Workstation edition? Slug it with limited inbound connections (say 25 vs 10 for client), and don’t allow some features like being a DC. You could even call this Windows 7 Ultimate and have the term “ultimate” actually mean something other than just being misleading marketing waffle.

One of the (very few!) problems I’ve had up to now is that Windows Live Writer and Windows Live Messenger did not install since the OS version is not supported. I really like Live Writer, and use it on all three of my blogs (here, here and here) as the main tool for adding blog posts.

On Sunday, on the very long flight from Bangalore back home (an 11 hour flight, with two unscheduled stops was 11 hours late into LHR!), I had a brain spark. I guess 5 hours on the ground in Baku with no drink or food tends to do that! The idea was very simple: just use the compatibility tab on the program installer and tell the OS to lie to the installer as shown here: 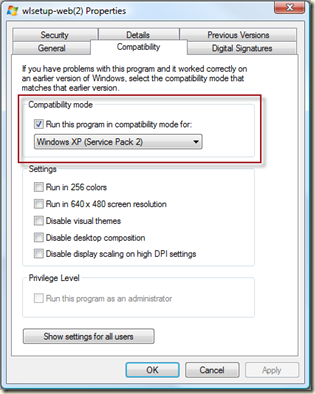 After selecting Windows XP SP2, click OK and then run the setup program. On my system, it took another 2-3 minutes and I now have Live Messenger and Live Writer working perfectly.

Thanks to the Application Compatibility team at Microsoft for helping out!

Word of warning. Installing Hyper-V will disable all power management. I would recommend against that on a laptop :) I will still go with 2008 just not Hyper-V.

I hardly ever write comments on blogs, but your article urged me to praise your blog.
Thanks for the read, I will surely favorite your site and check in occasionally.Cheers
Windows Live Messenger